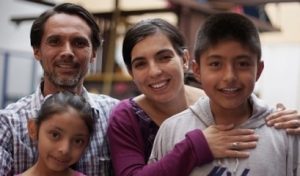 Robert and Sue, parents of 9 year old Ethan  and 6 year old  Olivia (not their real names) recently asked me how to help their creative, sensitive, gifted children build confidence and experience less fear and avoidance in new or difficult situations. As many creative, highly sensitive or gifted children (AKA CASIGYs) do, they would often pull back from new or challenging situations. He or she would claim to be shy, say she has a headache, or he has a stomach ache or some other physical symptom in order to get out of doing whatever it was that they didn’t want to do. As I talked with Robert and Sue, I remembered helping other families face similar situations. I also recalled facing similar challenges with my children and grandchildren … and yes, also with myself.  For I remember being taken to see a doctor and then a dentist at age 6 for frequent stomach aches. Now as I look back on this time of my life, there was significant family stress during this time, and I’m sure that had much more to do with my “frequent stomach aches” than did how my teeth aligned or how much or how I chewed my food.

I also found myself thinking about a recent winter afternoon when I took care of my then 4 and 6 year old grandchildren. Selfishly, I took them to a playground at a nearby park.  Why “selfishly”? I wanted to encourage them to be physically active there to reduce their mischievous energy later.  The oldest is a girl, and as are many oldest children, she is an adventurer. She led the way through the partly grassy, partly snowy parkland. It wasn’t long before her 4 year old brother was in tears. He slipped and fell just once on the icy snow piles, and then pulled back and became afraid of falling on them.

His intensity kicked in, and he cried and begged me to hold his hand and help him cross these small snow piles. In my empathy, I did this a time or two, but I soon became impatient with what now felt like an unnecessary game to me. I got a hunch and decided to check it out. I tested the snow hills and determined that, as I thought, they were not totally icy. There was a thin crust of ice on top while underneath was softer, somewhat squishy snow. So I became the Mean Grandma and refused to lead him by the hand anymore.

Instead, I encouraged him to stomp hard, REALLY HARD on the snow hills, hard enough to break through that top icy crust. He was certain that he could not do it and used his tears to communicate his helplessness and his certainty that this was too dangerous for him.  But Mean Grandma prevailed. Notwithstanding his tears loudly in progress, I took him one more time by the hand, walked him up to the snow pile, instructed (strongly urged) him to stomp as hard as he could.

I kept moving, stomping as I went, to show him how to do it. He had a choice: he either had to let go of my hand or walk on the snow pile. He chose to hang on, and soon began stomping, timidly at first, and harder each time as I gave encouragement but mostly as his efforts quickly paid off. His feet broke through the top layer of ice and voila! He didn’t slip or slide any more. It wasn’t long before he left me behind and then called to me, asking me to watch him stomp up and down these snow piles, acting like he had been doing this all along, and like it was all his idea. Yes, it was his idea, after all. He had to own it as his idea in order to accomplish it.

How had I learned this? I too had been a shy, often hesitant child, but to my chagrin at the time, neither of my parents would let me get away with it. I had been forced to move forward, to move through my fears over and over again. They had not literally or physically forced me, but my feet had been held to the fire, so to speak, over and over again.

As you may recall, we get this reference of holding feet to the fire from the myth of the Greek 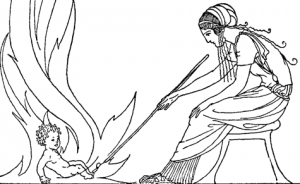 goddess Demeter. Demeter was the goddess whose daughter Persephone was abducted by Hades and disappeared. Demeter went into mourning for the loss of her daughter. At first she searched for her everywhere, until someone let her know that her daughter had been taken into the Underworld.  She went around to one after another of the Greek gods, asking for their help to get her daughter back. When that wasn’t successful, she went into exile, disguised herself as a maid and went to work doing child care. Metaneira, the mother of the boy Demeter was caring for, suspected something odd was going on, so she snuck in one night and caught Demeter holding her son Demophoon in the fire, with his feet on the coals. Metaneira instantly snatched him away and accused Demeter of trying to kill him. Then Demeter revealed who she was and what she had been doing- holding his feet to the fire to make him immortal. By holding his feet to the fire long enough, he would no longer be mortal, but become one of the gods. This story is not to be taken literally, but rather metaphorically. I am NOT recommending that we hurt our children in this or in any other way.

We mortals are often like Metaneira in her ignorance. We don’t understand the purpose of facing challenges, of “holding a little one’s feet to the fire”. And we haven’t learned how to do it so it doesn’t harm them. Instead , we often protect our children from all challenges or we immerse them in it. This story of Demeter holding Demophoon’s feet to the fire is an important metaphor and an illustration of the value of exposure to difficulty and challenge at a young age. Please do not misunderstand me here. I do not to condone or recommend child abuse, neglect or anything of the kind. Ever.

Instead, the moral of the story is that if you want your child to be a Super Hero, expose them to fiery challenges over and over again. That’s how they can develop Super Hero tolerance for difficulty and challenge which then builds in them Super Hero skills, strength and courage.

Back to my original story – I was able to recognize hesitancy based in fear, rooted in lack of knowledge and lack of skill in my grandson mostly because of how my parents had not allowed me to shrink away from difficulty and challenge when I was little. Of course at the time, I would not have expressed appreciation for it. But because of this, by the time I became a mother, I knew experientially how important it was to develop the skills to do the thing I was afraid of and thereby move through the fear.

And Life, with its odd sense of humor, has given me lots of practice with this, in my own life, and later with my children. I have joked that if I had allowed it, my youngest son would still have been eating baby food when he was a teenager. He didn’t like many foods, and in his sensitivity and intensity was hesitant about new things in many ways.  He also hated to read. He swore he could not do it. He despised word problems in both math and language arts. He was certain he couldn’t do them and took pains to make sure I knew how he felt. He wanted anything difficult to be done for him.

Not that my parents were perfect or that I have been a perfect parent. They made plenty of other mistakes, and so have I.  Thanks to their willingness to hold my feet to the fire – their commitment to help me develop my skills and abilities even when I objected vociferously, I knew better than to give in to my son when he wanted to shrink back in fear and inadequacy. And I had a model to follow. My son was angry, even livid with me for not doing his homework for him. Instead, I would ask him question after question. My questions were designed to lead him to what he needed to think about or understand in order to solve his homework problems. Yes, it would have been easier to tell him the answer, but I couldn’t live with myself if I had done it. So we spent many an evening in conflict over this. And every so often through the years, the memory of these homework battle would come back to haunt me, and I would wonder if I had done wrong by him in being a Mean Mom.

It wasn’t until a couple of years ago, now that he’s thirty-something, and we were sitting on his patio over dinner, that he brought this up to me. My heart rose into my throat, in anticipation of learning of One More Thing I had done that had not turned out well. He was reminiscing about his elementary school years. To my surprise, he told me that now when he’s facing tough problems at work, often he finds himself asking himself the same kinds of questions that I used to ask him—back when he was so angry with me and we had the battles over homework. He thanked me and identified that this was how and when he learned problem solving skills. I sat there with my mouth falling open.  And my heart was now in my throat for a totally different reason than it had gone there.  All the guilt I tortured myself with so many times during these 20-some intervening years, about the homework battles for being such a “Mean Mom” was totally unnecessary!

So when you’re in the thick of a Homework Battle or some other situation in which your child pulls back and insists that they “can’t do it”, encourage yourself. Encourage them.  It may be a very long time before you get any positive feedback (if you’re lucky enough to get it at all). But it is crucial that you hold your children’s feet to the (metaphorical) fire.  It’s never too late to start this, whether your children are 2 or 22. It’s critical—AND POSSIBLE— to help them overcome their fears and learn the life skills they need to become the confident creative, sensitive and/or gifted adults that they can be. That’s what I shared with Robert and Sue, and what I share with you here:

7 Useful Tools to help you Hold Their Feet to the Fire to Build Their Skill and Confidence:

analogy of riding the waves in the ocean and waves of emotion was the best! NHJ, GT adult & parent. SENG Conference, 2015

Thank you Sharon. I experienced affirmation and helpful redirection on things to improve!! FN, webinar participant.

Abnormal circumstances go with abnormal feelings is the best. I also like gripping something and letting it go to help letting go of emotions. SE, GT Educator. SENG Conference 2015.

I liked learning that the top three issues facing gifted people are over sensitivity, anxiety and depression. Attendee CAGT 2016

I like the analogy of ocean waves and emotion waves – and that there are degrees of feelings, just like different colored flags on an ocean beach. I want more time to learn about this!

Great stories. I liked how you explained the steps of recovery. VD. GT teacher. CAGT Conference 2013

The next best thing to winning is losing. at least you’ve been in the race.