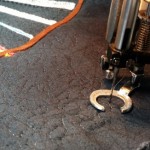 Mistakes: Antidote to Perfectionism, As Revealed by  One Day’s Contemplative Handwork™

CASIGYs™, AKA Creative, Acutely Aware, Super-Sensitive, Intense, and/or Gifted You-s are known (among other things) for their vulnerability to perfectionism. We can have pretty (OK, very) high standards for ourselves, and sometimes for others, too. Those high standards can easily slide into personal expectations of doing everything perfectly.  This can translate into expectations of BEING PERFECT.

Confession time: One day not long ago as I made meandering quilting stitches on the dark fabric of the face of this small wall quilt in-the-making, the nasty inner voice started up again: “See that awful mistake? You broke an important rule right there! No one will ever want THIS hanging on their wall!” As I continued to stitch in spite of the barrage coming my way (inside my head, of course), I began to notice the similarity of this creative process to that of breaking new ground elsewhere in my life. 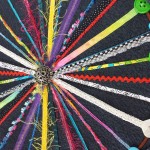 When I am doing new things in life, moving out of my current comfort zone or beyond my current skill set, that’s when the voice in my head (yes, I have them, too) has a heyday. It flings its perfectionistic drivel at my Achilles heel: “You messed up again! This is awful! That’s a mistake you can’t recover from!”   As I thought about this while the sewing machine needle went up and down and I moved the fabric round and round under it, I was soon talking back to my Inner Critic. “Who cares if I broke the Quilting Goddess’s rule about not crossing over a previous line of stitching? In addition, WHO is EVER going to get close enough to the surface of this quilt to compare the radius of the curves and know that they don’t match? And (here’s a good one!) maybe, just maybe, the irregularity of my stitching creates interest and adds character to the quilt-to-be.”

Further contemplation as I continued to stitch moved my inner process along to a place of greater significance. Maybe,, just maybe the (yes, many) 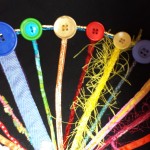 mistakes I make in other areas of my life also aren’t as devastating as my Inner Critic would have me believe. Another realization began to dawn on me: maybe making these “mistakes” and allowing some to remain in this finished fabric piece could help me accept and even welcome mistakes elsewhere in my life.

Why do I share my not-so-pretty personal process? If you’ve read this far, I’m guessing that you may have a perfectionistic Inner Critic, too. Or you may know someone who does. Maybe you’d like some encouragement that your mistakes aren’t as awful as your Inner Critic would have you believe, too. Maybe you appreciate the reminder that in fact, making mistakes may even be necessary to acquiring new skills. In fact, groping in the dark is how we often traverse new territory. Even more importantly,

what if doing things perfectly isn’t what life is all about?

What if BEING PERFECT isn’t necessary at all?

What if it’s actually the irregularities in our life’s pathways and how we navigate them that are create interest and build character? 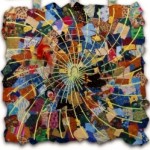 I have heard that Amish quilters purposefully make a mistake in each and every quilt to remind them that they are not God. I have never had to do this. My debate is always whether to take out the awful stitches or leave them in and find a way to camouflage them.

I know that I am not God.

But then again it seems that I expect that I should be like God – that is, perfect.

The question for me is often whether I am human or some substandard species. What I hear from my counseling clients tells me that this is the struggle that many creative, highly sensitive or gifted people have, whether they are children, teens or adults. And of course, we teach what we most need to know in life, so I have no need to share their stories here, since I have plenty of fodder in my own life.

We’re often told to silence the voices in our head that criticize us. Or ignore them. As this vignette shows,

I find it more fruitful to engage in dialogue with these nasty inner voices.

The conversation that ensues in my imagination, especially if this conversation takes place while I’m engaged in a hands-on, creative pursuit that demonstrates the issue at hand, is more productive than one that simply spins the hamster wheel in my head, covering the same territory over and over again. Instead, new neuronal connections happen in my brain and simultaneously a path is created internally that leads to a new place within my psyche – one that had previously been unknown to me.

My clients who have learned and practiced this have told me that doing this has been deceptively simple and surprisingly powerful for them as well. Yet its apparent simplicity and seeming silliness are barriers to maki 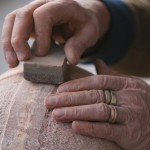 Clarissa Pinkola Estes, Jungian Analyst and author of “Women Who Run With the Wolves” writes that “experiential and artful play . .. assist[s] to soften old scar tissue, balm old wounds, and restore old skills in a down-to-earth manner.” She also teaches that making things with our hands that represents our inner experience heals us, and that the process of meditating on them sets us free in some way.

Carl Jung says it even better, in speaking of his own experience: “To the extent that I managed to translate the emotions into Images—that is to say, to find the images that were concealed in the emotions—I was inwardly calmed and reassured. Had I left those images hidden in the emotions, I might have been torn to pieces by them. . . As a result of my experiment I learned how helpful it can be, from the therapeutic point of view, to find the particular images which lie behind emotions.” 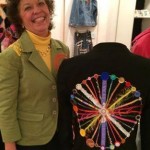 Are you intrigued? You can find out more about Creative and Contemplative Handwork™ as tools of healing and growth here.  And as always, I’d love to get your feedback – leave a comment below!

In order to make a real accomplishment he must sacrifice a number of other potentialities. He must vie up his identification with wholeness and voluntarily accept being a real fragment instead of an unreal whole. To be something in reality, he must give up being everything in potentia.