Inspiration for Parents and Teachers of Creative, Sensitive or Gifted Children:

Here are Nine Life Lessons I Learned On the Road to First Grade: 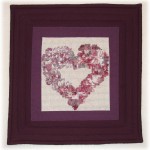 My little quilt, finished except for the label, was a burgundy, mauve and ivory ‘watercolor’ heart-shaped wall hanging. It had taken me many moons to make it, and I was tempted to skip the label. Painters sign their work on the front; quilt artists make a label for the back. But I just wanted to be done with it.  I hate making quilt labels, partly because I never know what to say on them, partly because that means it’s finished, and there’s no more chance  to improve it, and who knows how many other reasons. So I pinned this quilt on my design wall, sat down to consider it, and asked myself:  “What have we he 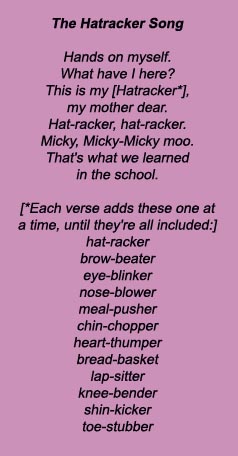 The next moment, I was listening with my memory. I heard:

“Hands on myself.
What have I here?
This is my hatracker, my mother dear.
Hatracker, hatracker,
Micky, Micky, Micky moo.
That’s what we learned in the school.”

In my memory, I was seven years old again, sitting in the back seat of a red and white 1957 Ford Fairlane station wagon. I was on the road to first grade, and my eleven year old brother Glenn, sitting beside me in the back seat, was on the road to fifth grade. We lived in Appleton, Wisconsin, and my mother drove us thirty miles to Green Bay every day to get us to the church school she and my father had chosen for us.

Glenn, being the older, first-arrived one, had the preferred seat, behind the driver.  He had the same view as the driver, or so I thought. He could see the oncoming cars better than I could. But I could see the fields and the road signs better. Small compensation; the action (that supposedly counted) was on the road, not in the fields. Between us on the back seat was a box with binoculars, toys and games. Anything to keep us occupied and prevent our bickering: “Don’t touch me!” “Don’t look at me!” “Get off my side of the car!”

Our proper preacher’s wife of a mother had a great variety of weapons in her arsenal to combat anarchy in the back seat. She taught us silly songs she learned as a summer camp counselor in her college days, long before we came on the scene.  She got us singing mostly when it was dark, (which was much of the time, during the northern Wisconsin winter). The songs ranged from “Jesus Loves Me” and “99 Bottles of (root) beer on the wall”  to “The Bear Went Over the Mountain,” and “Herman the Frog” (who sat on the bump on the log near the hole in the bottom of the sea) to finally, “The Hatracker Song”.

We also took turns telling stories. One person started it, then one by one we each added a sentence. Each person had to repeat the whole story and then make their addition. We kept it going until it got too ridiculous to follow or we got sick of that story. I didn’t like the story game much because being the youngest, I was usually the first one ‘out’ by messing it up. After that ended, we’d start a new story or a song about Herman on his log or the Hatracker’s version of school. 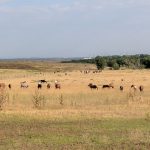 In the daylight, Mom started games of Zit, counting horses we saw in the countryside.  We called out “Zit!” each time we saw a horse. The first one to call “Zit!” claimed that horse. If you saw a herd of horses, and called “Zitterly-zit” you claimed all the horses you could see at once. The first one to see a cemetery and call it out ended the game, as that killed and buried everyone’s horses. Whoever had the most horses  when the cemetery was found won the game.

We also counted makes and models of cars we saw on the four-lane highway.  Glenn took the Fords, and I the Chevy’s, or vice versa.  As a result, I could – and still can – identify makes and models of cars better than most guys. That’s an important skill for a girl to have; you never know when you’ll need it. The winner would be the one who had the highest count, with no cheating. (My seven year old mind never questioned who would know if we cheated).

We also played I-Spy, hiding our imaginary selves in places visible from the car, or at night, inside the car with the others guessing where we had hidden. Our turn would last as long as no one could find us.  Why did Mom always get the longest turns? It wasn’t fair! 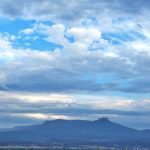 Then Mom would start an Alphabet game: completing the alphabet-in order, of course-from letters we saw on signs and other cars.  Or she’d say, “Oh, look, there’s a rabbit!” and pointed to a cloud, asking us what we saw. To this day, my brother and I both watch the sky “to see what we can see”.

What an odd thing reflection is.  It leads us along bunny trails into the deep dark woods of memory and sometimes ends in hidden treasure. It led me to the key of this quilt’s meaning, and at the same time, to the roots of lessons I obviously needed to relearn now, that I had originally learned on that road to first grade.

If I had been driving my kids thirty miles each way to and from school, I’d soon have been grumpy and complained about it.  But Mom never did, at least not when I was around. She made it fun for us, and kept her own sanity at the same time. Did she know that she was showing us how to open our eyes and look, really see, not just stare past or through things?

Did she know that she was teaching us to see with the eyes of an artist?  She commented on shades of light, colors, shapes, and textures. She taught us to notice what was happening around us, and to see what was different today than it had been yesterday. She taught us to look beneath the surface of things and to see what others did not see. She taught us that what we saw was valid, even and especially if no one else saw it.  She taught us to multi-task without multi-tasking, to develop our imaginations, to exercise our memories, to look for horses in the fields, to learn how to tell one make and model of a car from another and do it all in the guise of having fun.

Coming back to my current reality, I looked at my almost-finished quilt, and I realized that back on the road to first grade, Mom showed us at least nine different ways to make whatever (difficult) path we’re on in life palatable, or better yet, even fun.  Through music, humor, art and games she turned what could have been a long, dull ride into a beautiful adventure. This treasure had remained hidden from my awareness until now!

This quilt I had been making started as many tiny scraps cut from a small remnant of fabric.  Now they were transformed into a work of art. I made this quilt as a thank-you gift. Making it was fun, lowered my stress, developed my creativity, nourished and healed my soul like water in a desert. I hadn’t known until now that I was multi-tasking without multi-tasking, too.

Goose bumps traveled up and down my spine and my breath got stuck in my throat as it hit me. Ironically, until now, in spite of her many oil paintings and all the things she sewed for each of us, my mother’s legacy had been less visible to me than my father’s. In this moment, I realized that my mother’s artistic creativity is as much a part of my life and my work as my father’s deep thinking and focus on emotional and spiritual healing and growth. This must be what the Celestine Prophecy is referring to when it says that a part of every person’s mission in life is to synthesize and combine the distinct missions of both of their parents. Now I knew deep in my heart that the combined lessons and skills from both of my parents are the essence of what my life and my work is about.

And I learned these things not in graduate school, but on the road to first grade.

As I see it, here’s Nine Life Lessons I learned On the Road to First Grade:

Thank you again for everything you have done for both my son and myself! He has been coming home happier than I have seen him in years, and more willing to share about his day at school than ever before. He is setting his alarm clock without reminders, taking showers without reminders, making his lunch, and seeking teachers for clarification of assignments!!!! When I tried to remind him about something last week, he said, “If you want me to be independent, let me be independent and figure it out… END_OF_DOCUMENT_TOKEN_TO_BE_REPLACED

Thank you so much! Honestly, this really helps me understand myself a lot better and learn that I can heal myself and find my place in life. I feel that I’m not alone with my feelings and sensitivity. HA  10-19-2014

CASIGYs’ mascot is a cute way to visualize differences. Kids relate to your analogies. Attendee, CAGT 2016

We’re ALL using the ACES tools almost every day in some way. It helps our intense family members all be more peaceful and take challenges in stride much better than we used to. Mom of 7 & 9 year old highly sensitive boys.

I like all the tools in the CASIGY toolbox. Thanks for sharing them with us! Attendee CAGT 2016

Helped to know how/why GT population is more impacted than are others by trauma. Normal response to trauma is good. Thanks for “When to seek counseling”.  GT educator, GT parent.  SENG conference 2015.

I like the reflective tools – they will help me help my students emotionally. Attendee CAGT 2016

I like how you shared how the experience of negative emotions is essential for Advanced Development. Attendee, CAGT 2016

Only those who face their pain truthfully can let go of it and move forward with their creative energy and self-esteem intact.