Reflections on How to to Heal our Lives,
Feed our Souls, and Grow our Dreams 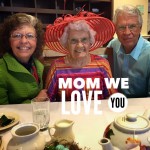 that I hated it. I also know it’s not politically correct, so I’ve not said it out loud. But it’s time to admit it. I hate Mother’s Day.

I first hated it when I was in my twenties. I felt hurt and angry at my mother for many things that she had done or not done that I felt hurt me when I was young. The more I looked, the more I saw of these kinds of things. I didn’t want to be a hypocrite, so it was hard to say all the sweet, sappy things on the greeting cards.  How could I be dishonest and say things I didn’t feel?

What I know now is that I was mostly angry with my mother for not being the perfect archetypal mother. She did not fill the shoes of the Fairy Godmother or the Mother of God or the Great Goddess. She was just human, dang-it. She made mistakes, lots of them, and she had weaknesses, to boot! As I became aware of what I felt were her mistakes and weaknesses, I was appalled. She had great gaps in who she was and what she could accomplish and do for me and be for me. And I resented it. I wanted more from her. More than is humanly possible, I have discovered. For we all have these gaping holes inside of us that we want filled and healed, and who do we turn to first for this? Our mothers, of course! It was absolutely essential for me to go through the process of identifying these early gaps and wounds. We cannot heal unless and until we know we have wounds. We cannot fill in the gaps unless we know we have them.

I also hated Mothers Day because I was angry at my mother’s mother. As a teenager and as I entered adulthood, she seemed to be rigid and perfectionistic, judgmental and grumpy and I couldn’t and didn’t want to live up to her standards. I also was afraid that I would become like her. Horror of horrors, I saw myself in her. She was highly introverted and had high standards for herself and everyone else.  Whenever she learned or discovered something, she thought it applied to everyone around her.  She wanted them to follow it, too. She had a strange sense of humor that could be hurtful to others when she wasn’t aware of it, and apparently didn’t intend it. Oh, shoot. I AM just like that-all of it, even down to having similar temperaments and personality types. I was afraid that I would embody all of her weaknesses, and none of her strengths. I didn’t know what her strengths were. All I could see were her glaring weaknesses.

I have also hated Mother’s Day because I was afraid that I’d make some of the same mistakes my father’s mother made. She passed on huge issues to her seven daughters and three sons about women’s roles,  sexuality and low self esteem and I didn’t want any of these gross flaws.  Mother’s Day brought all of this to my attention.

When I had children of my own, I hated Mothers Day even more. I knew I didn’t live up to what I needed to be as a mother. I knew I made huge mistakes. I could see where I’d missed the mark. All the hype about mothers and Mother’s Day emphasized to me the great gaps in myself as a mother.  I could see that I’ve not been there for my kids in ways that has negatively affected their development. I passed on to them many of the family issues that have hurt and even horrified me. As usually happens when we do this, my attempts to not make the same mistakes as my parents made, resulted in me inadvertently flipping the coin over and making the opposite ones.  Most of the time, this awareness could stay on the periphery, but Mother’s Day would often pull all of this smack into my consciousness, front and center.

I have also hated Mother’s Day also because all I ever wanted for Mother’s Day was a day off. I didn’t want one more bouquet of flowers or another family dinner. It wasn’t that I didn’t like them. It was that I wanted a day or (if I was thinking big) a weekend off, to myself – all by myself. I never had solitude when my kids were little. As a deep introvert, that’s what I longed for more than anything. And I didn’t know how to get it.

Now that my kids are grown, Mother’s Day is really complicated. There’s three or four generations and kids with spouses to balance schedules and emotional needs. This is something that is common to all families; how can it be so hard?  Why can’t we just gather together and celebrate life and love and motherhood and the mystery that life continues in spite of our mistakes, bumbling,  ignorance, immaturity, and shortcomings?

As I reflect on it, I now see that I have received much from my mother and all of my foremothers. In spite of their unmistakable faults, they have passed on many wonderful things, too. My mother’s mother, together with her husband, founded a clinic that’s now a hospital in Juliaca, Peru, on the shores of Lake Titicaca. She was a risk-taker who took her six month old daughter from southern California to the high Andes. She paid a huge price in her own health, and also in the loss of an infant son who was born and died while she lived there. She and my grandfather both had major health problems while living there, and so returned after just one term of service, leaving the work they had started for others to carry on. Her oldest child, my mother, contracted polio soon after their return to the States, and while her youngest was just an infant, She had a love of risk-taking, a passion for service, for pioneering new ways of helping and serving others that I now carry within me and live out. Learning these things helped me look at her through the eyes of an adult, and no longer through the eyes (and expectations) of a child.

My other grandmother? She had wanted to attend college, but became pregnant before she had a chance to go. She soon became pregnant again and again; she bore ten children, and took another one in to raise as her own.  What did she do when her goals were thwarted?  She kept her great love of learning, and passed it on.  It still burns bright in her grandchildren and great-grandchildren. Most of her children attended college; several of them have advanced degrees. Her children have been all over the globe as teachers and missionaries. She didn’t live through them, but she taught them and encouraged them. I also remember her letters that came regularly when I was a child. They would describe the flowers growing in her garden, the birds and what they were doing, and what was happening with the other family members. Her love of nature and of gardening was picked up by my father, and passed on to me.

My mother lived her life with the attitude, “If you can do it, so can I,” even though she had lost a third of her muscles to polio. She was a swimmer, teaching swimming at summer camps. She sewed most of the clothes that my brother and I wore as children. She returned to school when I was in grade school, finishing college, and going on to graduate school, twice. After teaching for the rest of her adult life, she retired and took up oil painting, creating works of art that grace our homes to this day. Once I found this other perspective, I realized so much that I wrote a whole separate post about her positive influence on my life – Inspiration On the Way to First Grade.

I have trudged along, carrying all this baggage, bumping into it every Mother’s Day. I’ve not wanted to acknowledge it. I was embarrassed and ashamed to have it. I also hadn’t known what to do with it. Now that I’ve dug it up, and then around in it, I’ve discovered that there’s more than meets the eye. In looking past the surface of the imperfections of my foremothers and of myself as a mother, I’ve found great blessings, and deep roots of love, creativity, intelligence, and sensitivity.

As I reflect more, I understand that my foremothers lived lives of service and blessed others even though their lives didn’t proceed as they had originally planned. They had the ability to see great possibilities, but they were able to let go of achieving their great and grand ambitions, and be content with what they could actually do in this life. Not that they accomplished nothing, but they relinquished their perfectionistic tendencies enough to do what they could, even if that was less than they desired to do. They dug deep enough to tap into Life itself and pass it on. That’s something for me to remember, celebrate and emulate.  With this understanding, I no longer need to hate it; from now on, I can say I Love Mother’s Day.

I can also remind myself that when we are willing to open our minds and hearts, and follow the flow of our thoughts and feelings, and keep following them, they eventually reach a resolution. A healing, positive resolution. It is only when we dig deep enough to debride and cleanse our inner wounds that we find the buried treasure that’s essential to heal our lives, feed our souls, and grow our dreams.

I’m happy about Sharon’s ability to connect with my 17 year old highly sensitive daughter! She was excited to get to go again!

I like how you showed that gifted kids can learn to accept and ride their waves of emotion. Attendee CAGT 2016

I like ACES – how gifted students can become social and emotional ACES. I like the tools you teach to help them do that. Attendee CAGT 2016

Thank you for writing this Sharon. It is beautiful and came at just the right time for me. I appreciate the time, effort and insight it took to write and share. God bless.[ emailed 3-24-17 RE: How to Spring Into Life When Change Isn’t Easy]

Today’s Webinar was informative, comprehensive, and extremely helpful. You proved an absolute connection with people who fit CASIGY characteristics and I want to take a brief moment in time to personally Thank You. I can hardly wait for the next webinar. With heartfelt appreciation ..thanks again. HC

I like your cycles of discouragement and encouragement. We barely scratched the surface of you have here. I want to learn more. Attendee CAGT 2016

The psychological truth in “The Red Shoes” is that a woman’s meaningful life can be pried, threatened, robbed or seduced away from her unless she holds on to or retrieves her basic joy and wild worth. The tale calls our attention to traps and poisons we too easily take onto ourselves when we are caught in a famine of wild soul.